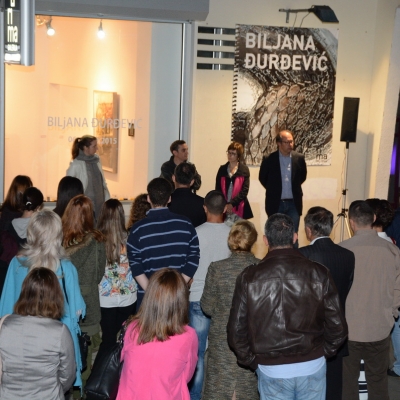 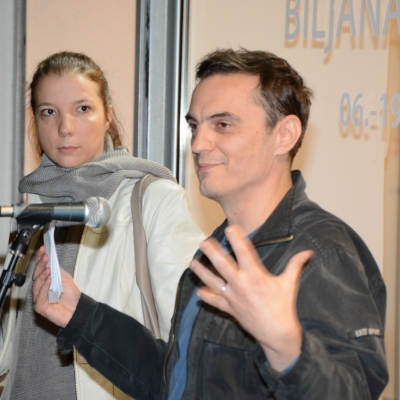 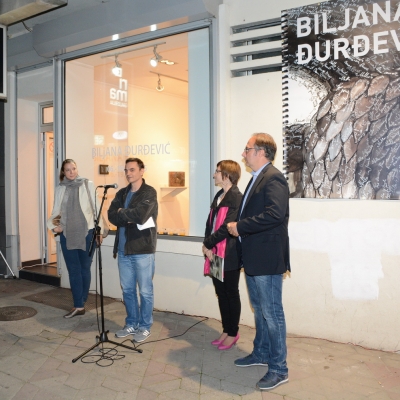 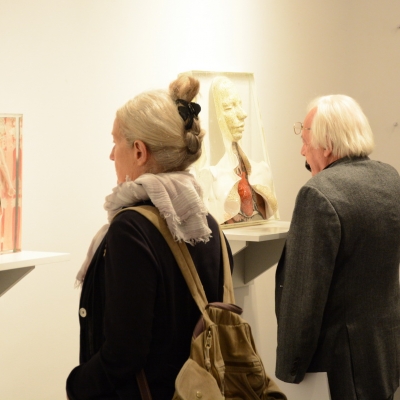 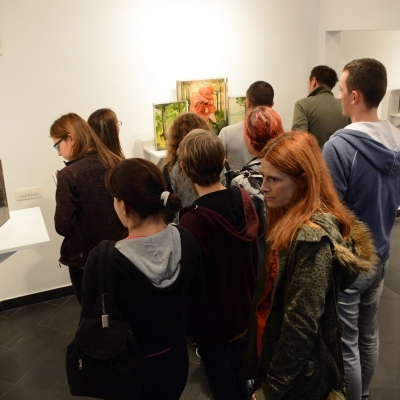 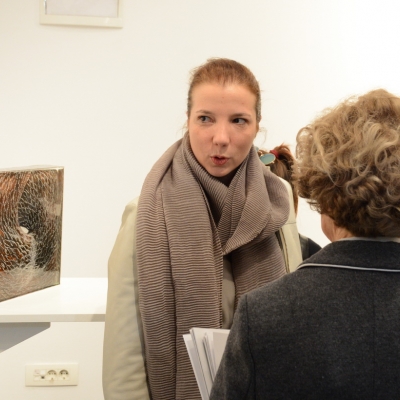 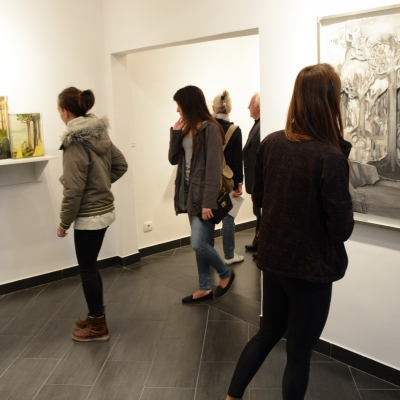 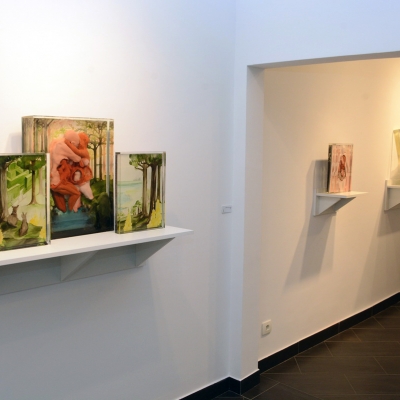 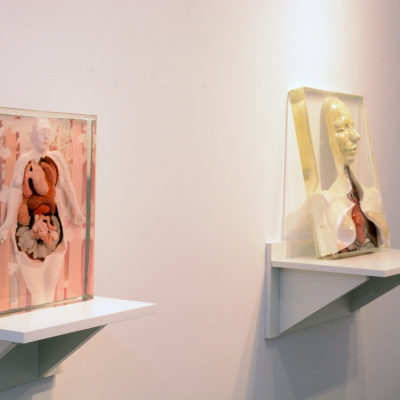 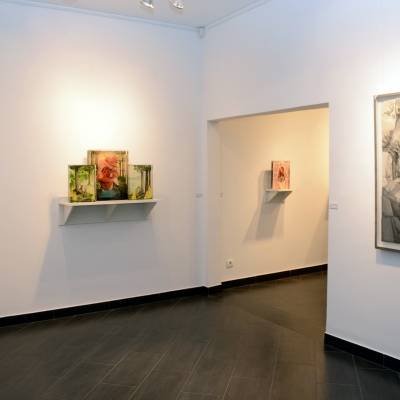 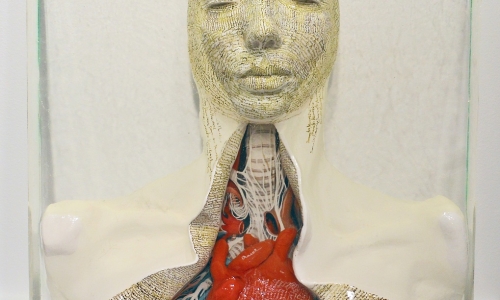 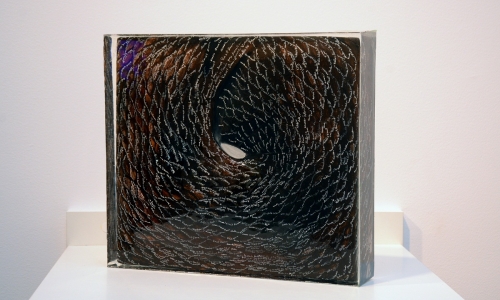 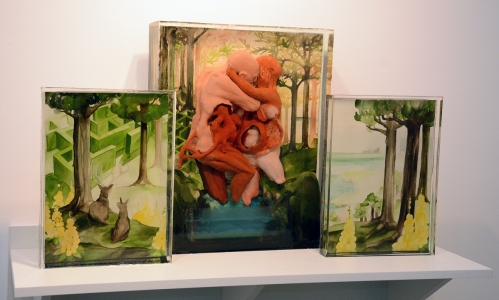 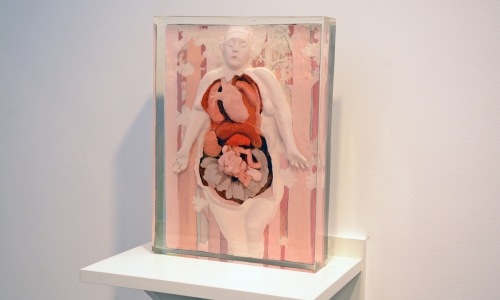 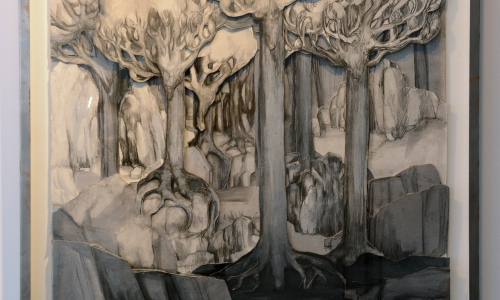 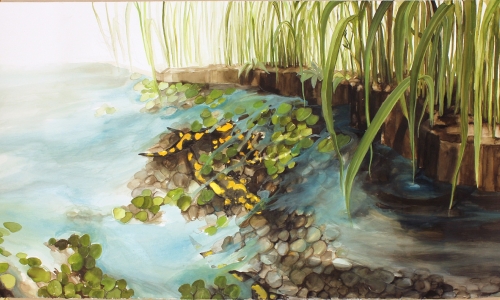 Miroslav Karić
THE CABINET OF CURIOSITIES

The current exhibition in the Rima Gallery, called “The Cabinet of Curiosities” presents a new phase in Biljana’s consistent research in the potentials of specific stylistic and interpretative approaches she has developed in art. The characteristic painterly expression and draughtsmanship are based on and informed by intensive studies and exceptional knowledge of, among other things, the achievements of classical art and old masters. The artist shows several works where she introduces and subtly intertwines the painterly with the sculptural. The result of her linking of two-dimensional paintings and sculpturally shaped details is a specific kind of object where the visual effect is emphasised with the artist’s experimental application of the transparent epoxy resin as one of the main constituent materials. The spatial installation is made of transparent, quadrangle objects in epoxy containing integrated painted and sculpted elements completes in a specific way the final presentational format of the exhibition display, initially inspired by private collections of natural and anthropological rarities and curiosities, assembled for the first time in the Renaissance. The artist’s choice of the Wunderkammer model was primarily induced by the phenomenological, cultural and ideational aspects of this concept and its interpretations as a uniform space where the exhibits and the system of interrelations reveal not only the taste, affinities, passions, beliefs or personal perception of the world, but also the spirit of that particular moment in the evolution of civilisation. In that sense, the artist was particularly interested in the collection of Athanasius Kircher (1600-1670), a German Jesuit, an exceptional connoisseur and man of learning in the areas of medicine, geology, history, and linguistics, who kept in his famous and impressive cabinet of curiosities in Rome – Kircherianum – various works of art, Etruscan bronze sculptures, Egyptian antiquities including mummies, skeletons of exotic animals, rare minerals, as well as contemporary technological innovations, such as the dark room for the demonstration of optical instruments. As undoubtedly the most significant single attempt to systematise old and new knowledge and achievements of that time, Kircherianum has remained the emblematic image of an age and a new chapter in man’s endeavours to understand all elements of worldly reality. In her latest work Biljana also refers in certain visual and conceptual solutions to the work of the Italian Baroque painter Pietro da Cortona, particularly his atlas of anatomical drawings Tabulae anatomicae, famous for the artist’s realistic representations of dissected male and female figures placed in idyllic landscapes among classical ruins. Detailed anatomical drawings of Pietro da Cortona, but also examples of anatomic dummies made in ivory – objects popular in medical and collectors’ circles in the seventeenth century – intrigue Biljana primarily as examples of the ways in which the studies of human physiology from that age combined and developed the knowledge about the psychological nature of individuals. Visions and discoveries of the Renaissance and the Baroque also inspired the artist in her interpretations of the carefully selected kinds of flora and fauna and she introduces their complex symbolic connotations as important elements of the main thematic content of the work. Thus, representations of snakes, salamanders, forest vegetation and occasional intertwining with human anatomy convey Biljana’s very subtle and poetic reflection of personal internal, emotional states processed either in the relations with other individuals or in the experienced social contexts of immediate surroundings. Observed in the given spatial formation, a specific network of visual fragments and signs, Biljana’s “Cabinet of Curiosities” is a unique summary of the artist’s key aesthetics, motifs or thematic characteristics and preoccupations. In final issue, the structure of the display gives shape to the essential idea of the exhibition as a conceptual and spatial articulation of an intimate perception and idiosyncratic experience of reality where details such as the snake slough with inscribed proverbs in Latin : “Love conquers all” and “There is no sincerity in the world”, the dissected lovers in a passionate embrace, the silent and lonely female figures in a dark environment or the artist’s stylised self-portrait may strike one at first sight as cryptic in their allusive discourse immanent to Biljana’s poetics, but will convey something about us all, about the time and circumstances of our everyday existence.