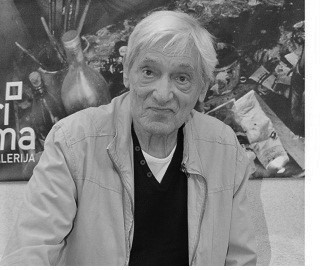 PETAR OMČIKUS (1926-2019)
He was born in 1926 at Sušak, near Rijeka, and moved with his family to Belgrade in 1937. In occupied Belgrade, between 1941 and 1943 he attended the School for Applied Art. Towards the end of the war he joined the Propaganda Department of the General Staff of the National Liberation Army. He enrolled the Academy of Fine Arts in Belgrade in 1945 and studied in the class of Professor Ivan Tabaković. He exhibited for the first time at the Autumn Exhibition of the Association of Serbian Artists (ULUS) in 1946. In the period April-August 1947, joined by a group of colleagues, he left regular classes and went to Zadar to work on his own. After their return to Belgrade, members of the Zadar Group were expelled from the Academy but after two terms they were allowed to return. Omčikus then decided to leave the studies permanently and between 1948 and 1951 he lived and painted in Rijeka, together with his colleague and spouse Kosara Bokšan. After he returned to Belgrade he joined the group Eleven Artists and exhibited with them in 1951. In November of that year he organised his first solo show.
Together with his wife and some colleagues he moved to Paris permanently in 1952. He first exhibited with Kosara Bokšan and the London Group in New Burlington Gallery in London in 1954. He had his first solo in Paris in 1955, in Gallery Arnaud. Afterwards he exhibited his works at the eminent May Salon (1955) where he was noticed by the French critic Michel Seuphor who included him in 1957 in his Dictionary of Abstract Painting.
He had a family house with studio built in Vela Luka on the island of Korčula. Upon his and his wife’s initiative there were three international meetings of visual artists in Vela Luka in the period 1968-1972.
Omčikus had over sixty solo shows and participated in numerous group exhibitions. The first big retrospective was held in the Museum of Contemporary Art in Belgrade in 1989.  He has received the national recognition for extraordinary contribution to national culture (national pension in 2007). In 2011 he established the Foundation of Kosara Bokšan and Petar Omčikus. He is a full member of the Serbian Academy of Sciences and Arts (2015).