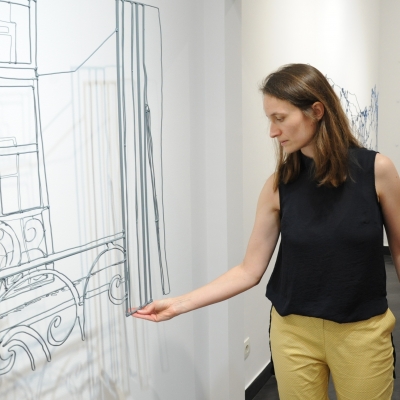 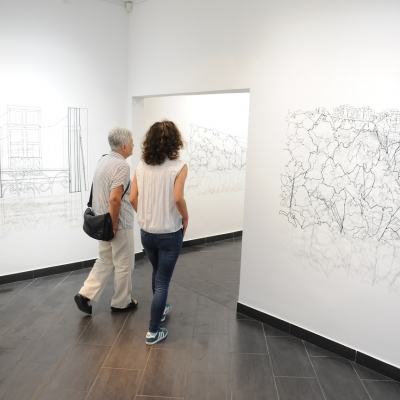 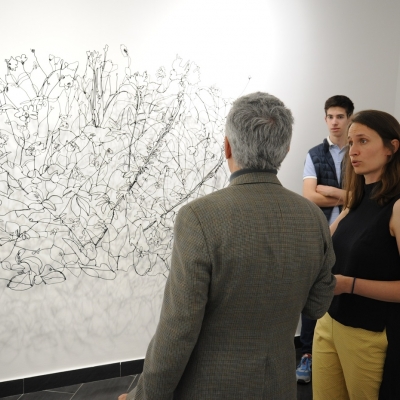 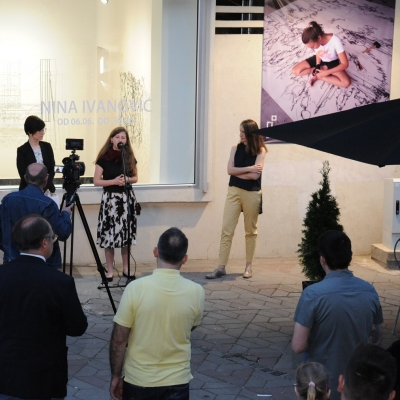 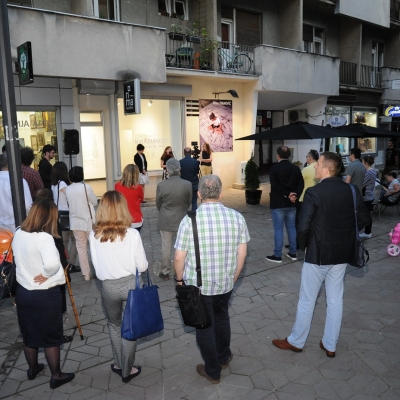 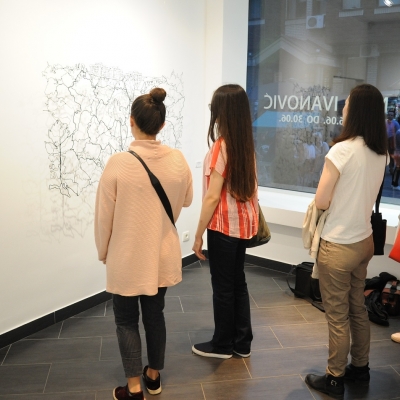 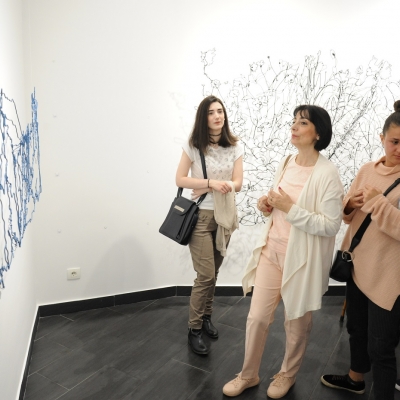 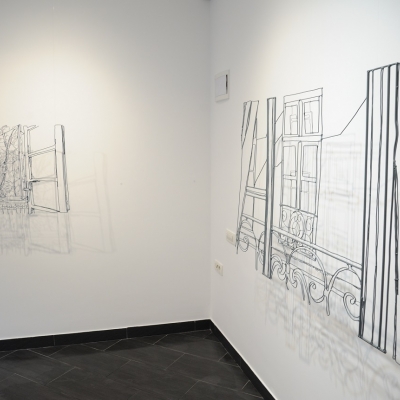 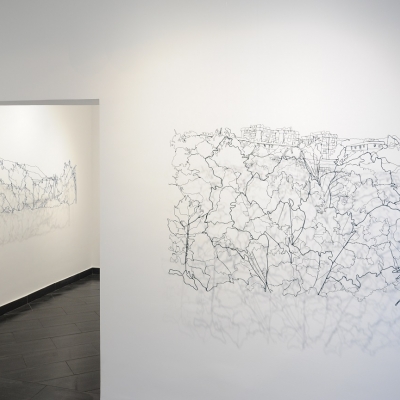 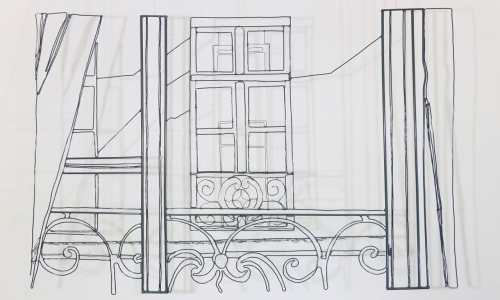 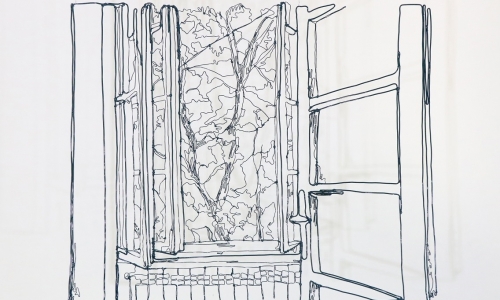 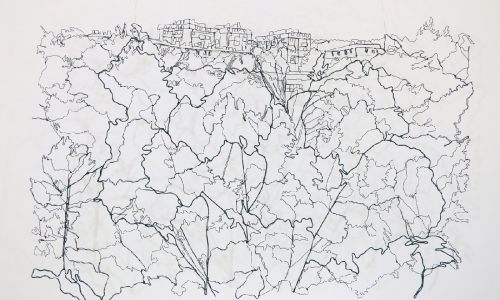 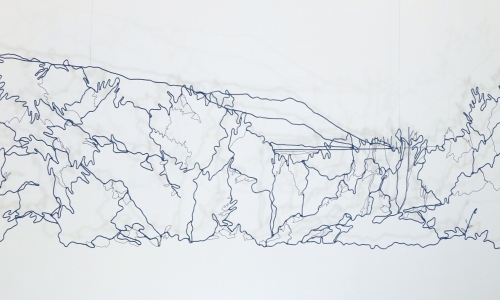 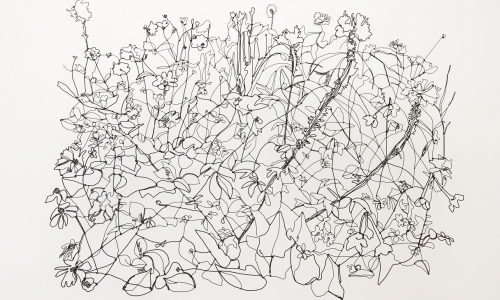 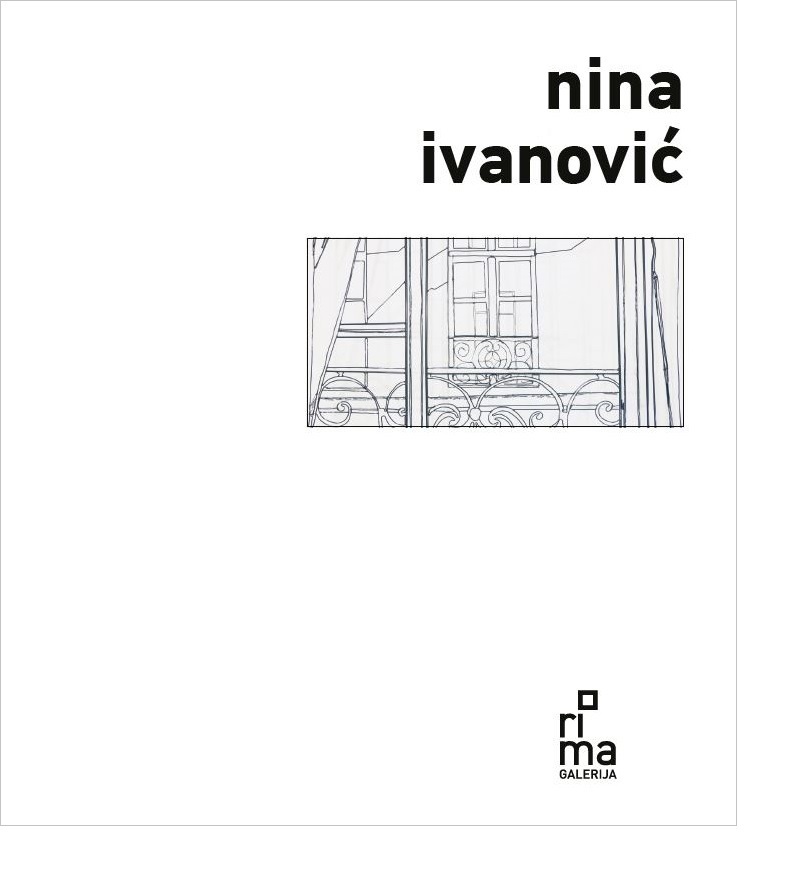 ON SPATIAL DRAWINGS OF NINA IVANOVIĆ

The ten-year long artistic praxis of Nina Ivanović has been marked by important awards and numerous exhibitions (1). Her specific features are contained in an authentic methodology of creating a work of art essentially based on connecting and enhancing the qualities of the media of drawing, photography and sculpture.

The chronology of the artist’s involvement with different media and even more with their permeation implies gradual changes in the shaping and presentation of the artistic content. At the beginning, the artist’s main expression was through drawings produced quickly, secretly, drawn with felt-tip pens or rapidographs (2). She was inspired by the desire to memorise views/fragments of everyday life situations taken from an urban or natural environment. The uninterrupted linear course comes through as the most significant characteristic of these works. The quality of linearity is gradually transformed from two-dimensional into three-dimensional sphere through the wired materialisation of the drawings in space. Nevertheless, in time, the need for rapid action/recording of certain visual fascinations (3) in the drawing was replaced by the use of photo camera, and so the basic departure point for an artwork became an analogue photograph. After this change, the role of the drawing has been represented in abstraction and elimination of the photograph. Manual action makes the visual fact pass from the mechanical sphere of the recorded memory into the domain where the main contours of the memorised are impressed on paper. A spatial drawing made from wire has the final role in the materialisation and preservation of memory in space.

In her considerations, the artist has been preoccupied with situations from urban or natural environments; however, she has always approached people or the countryside in the role of an accidental passer-by, a hidden narrator who speaks from a safe distance, but close to the happening. The distance between the artist and the event produces frames of situations where life continues regardless of its surroundings. One gets the impression that the artist is essentially motivated by not interfering with the course of events and that her only desire is to immortalise the moment with her imperceptible gaze/or photo camera. In her previous practice Nina Ivanović has mostly relied on photographs, her own and those made by renowned photographers or the Internet database, calling attention to the fact that memories are generated as perspectival, networked (4) visual evidences.

Her thematic repertoire contains representations of human interrelationships (“Ballerinas in the Fountain”, “Window Cleaners”, 2012; “The Swing”, 2014; “Fisherman”, 2015; “The Kiss”, 2016; “The Months of December-March”, 2017) located in urban or natural environments, but also of the frames of certain motifs from nature (“Garden”, 2013; “Flowers”, 2015; “Landscapes” and “Mountain”, 2018). An important part of Nina Ivanović’s opus is directed towards studies of the artistic material, tools and apparatuses which an artist uses when working, as proven by spatial drawings from 2015, such as “Pliers” and “Pentax”. By making a work of art out of the equipment used in the production of an artwork, the artist integrates the creative process into the final form of an artwork. The view of the world through the lens of a photo camera and the view of the camera through a work of art indicate the importance of auto-reflection in satisfying the need to memorise. By using the sky or the wall as their background (5) those drawings made from wire represent the spaces of inscribed, materialised memory.

View through the Window

The recent series of spatial drawings of Nina Ivanović, exhibited for the first time in Gallery RIMA in Kragujevac, follows the already established concept of combined action of the media of photography, drawing and sculpture. The basic motif of this series is the view through the window, the artist’s gaze from her intimate ambience to the outer world.

The phrase view through the window is related to the Renaissance understanding of a painting as the picture of a window opening towards the other reality. In his famous treatise De pictura (1435), Leon Battista Alberti stated that when painting he was primarily drawing the frame he saw as an open window through which the painted subject was observed (6). When we look at the photographs of Nina Ivanović, in fact, we do not see them, we forget about their material aspect since, wherever it shows and in whichever manner, a photograph is always invisible (7). In some of her photographs there is a visible borderline serving as a passage, an open window which provides the illusion that we are present and participate in the view through. All of her photographs reveal the legacy of linear perspective, her feeling for the gradation of the depth of space where the closest plane is the one next to (the observer’s) open window. Every new segment of the creative work of Nina Ivanović, her draughtsman’s abstraction of photograph and the wired materialisation of the drawing in space, express mistrust of illusory depth.

The linear constant of the drawing is an imprint of the main contours of the photograph. Without any analysis of the particulars or details, the drawing extracts the fullness, the volume and depth of the photograph and connects with a single movement the close and distant views into one plane. A spatial drawing, although made up of numerous pieces of wire and visibly tied in many places successfully retains the quality of one single plane. One could speak about many aspects of the space a wire-drawing occupies. The drawing itself contains empty spaces. The wire, at the same time thin and strong, takes up a space of 0.3-0.8 mm. The distance between the reverse side of the work and the gallery wall is also an integral part of this seemingly flat sculpture. The spatial gaps are not places of absence but elements of a sculpture, which activate its transparency. When spatial drawings are exhibited light produces visual changes and the shadows that form on the wall complement and complete the immaterial effect of the artwork.

Spatial drawings, exhibited in Gallery RIMA in Kragujevac were created as a reaction to a need to record views through open windows of intimate spaces. Those works were made after the artist had decided not to archive but to return and enter them (8). They could be classified, according to their framing into: the works where the gaze extends from the window including the peripheral aspect or the conscious acknowledgement of the window as an inter-spatial borderline, and the works where the gaze comes from the interior encompassing the window as an emphasised borderline between the internal and external space.

In the works “Gaze to the Park” and “Gaze to the Garden and the Sea”, the gaze extends from the window. Although we know that the gaze comes from the apartment, an intimate living space, it seems there is an aspiration for movement, from oneself towards an immediate inclusion of the external. In their conception and form these works were created before the “Mountain”, for which the artist was awarded at the 57th October Salon and the “Landscape” (9), spatial drawings recently installed in the Italian city of Vittorio Veneto on the occasion of the WWI centenary. In those drawings the artist studied the symbolic relationship (10) between people and massive mountain barriers, as well as the mapping of changes in nature, caused by historic and social turbulences. “Gaze to the Park” and “Gaze to the Garden and the Sea” analyse the changes that natural landscapes produce in a personal topography of remembering. Emphasised by their monumental format, elements from nature, such as tree-tops and leaves or flowers that blend with the marine horizon, contribute to the abstract expression of these works.

In the works “Gaze to the Park” and “Gaze to the Window”, the gaze comes from the interior, as an outcome of a peaceful, contemplative state. In the first work the gaze is directed towards the blooming trees, a natural home environment. In the second, the gaze is directed across the road to the closed window of a neighbouring apartment. That window looks like a safe end or borderline of internal space, but the fact that the artist’s window is open implies her need to maintain contact with time outside the walls. Although these works were created as acts of contemplation not measurable in time, the temporal definition is also an important segment of an artwork, as evidenced in the best way by the (wired) line of the shadow in the upper right segment of the work “Gaze to the Window”.

The artist’s aspiration to remember the spaces where she has been becomes a kind of strategy that opposes the process of forgetting (11). By recording fragments of the transitory, the artist not only keeps from oblivion but also materialises in her wired drawings the memorised moments in space. The materialisation of memory is in fact the process of memorialisation. By entering memories in drawing/remembering, by subjecting the wire to the contours of memory, Nina Ivanović establishes the focal points of her memory. Her spatial drawings indicate the ways of preserving memories through processes of artistic articulation. The framework of Nina Ivanović’s artistic creation is her personal, intimate, unobtrusive narrative about transition and in the process of its creation this narrative examines the stability of memories within (the testing of) the borderlines and potentials of artistic media.

1 Nina Ivanović received the following awards: the award of the 57th October Salon (2018), the first award for drawing from the Vladimir Veličković Fund (2014), the award of the Faculty of fine Arts (2009). Art projects, solo and group exhibitions have been organised in appropriate exhibition spaces in Belgrade, Basel, Montpelier, Paris, Vienna, Berlin and many other European cities. As a co-organiser of Artistic Space U10, she has actively participated in defining the contemporary art scene in Serbia and also in communicating with and joining individuals from the world of art internationally.
2 Nina Ivanović, Izložba Elementi stvarnosti (exhibition Elements of Reality), Umetnički prostor U10, Beograd, 2012.
3 Idem.
4 Alaida Asman, (Aleida Assmann) Duga senka prošlosti (The long shadow of the past), Biblioteka XX vek, 2011, 22-25.
5 Nina Ivanović, Elementi stvarnosti, Umetnički prostor U10, Beograd, 2012.
6 “First of all, on the surface on which I am going to paint, I draw a rectangle of whatever size I want, which I regard as an open window through which the subject to be painted is seen…” Quoted after: Lyle Massey, Framing and Mirroring the World from: The Renaissance World Routledge, 2007, 63. Accessed 30 April 2019.
https://www.routledgehandbooks.com/doi/10.4324/9780203401163.chTwo
7 Rolan Bart (Roland Barthes), Svetla Komora (Light Chamber), Artget, Kulturni centar Beograda, 2011, 14.
8 Mia David, Izložba Naravno da te još uvek volim, tekst za rad “Poljubac”( exhibition Of course I still love you, text for the work „The Kiss“), Galerija Navigator, 2016.
9 Izložba 1918. Quando scoppia la pace, curated by Dimitri Ozerkov, Vittorio Veneto, Italy, 2018.
10 Jovana Vasić, tekst za rad “Planina” (text for the work „Mountain“), 57. Oktobarski salon - Lepota kakofonije, 2018.
https://www.oktobarskisalon.org/en/umetnik/nina-ivanovic/
11 Neobljavljeni tekst Nemanje Nikolića o prostornom crtežu “Pecaroš” (2015), dostupan po zahtevu. (Unpublished text by Nemanja Nikolić on spatial drawing „Fisherman“ (2015), available upon request.)