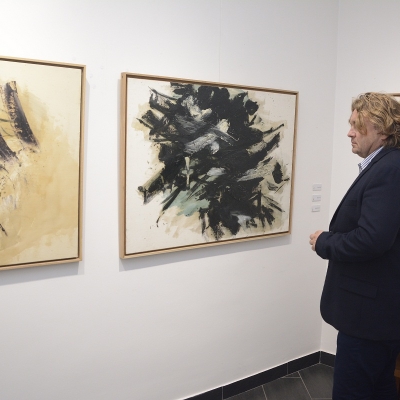 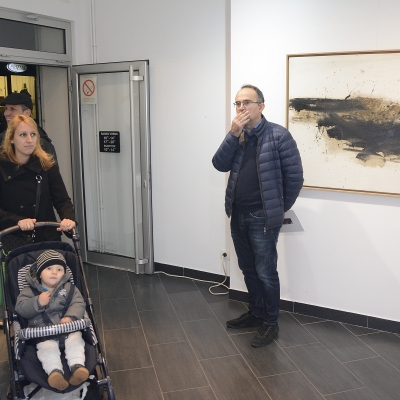 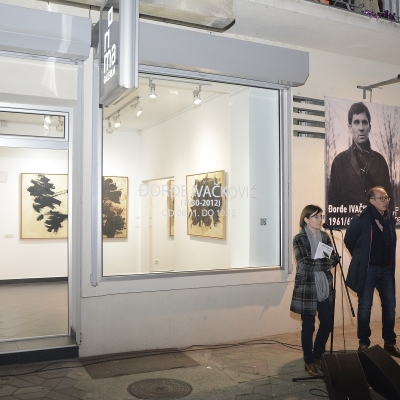 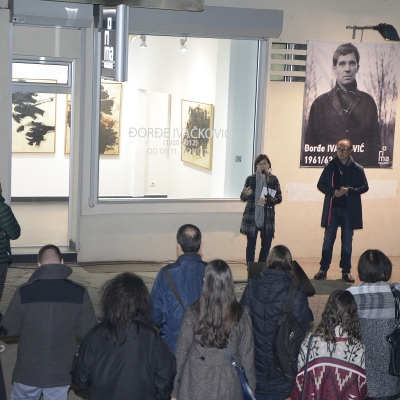 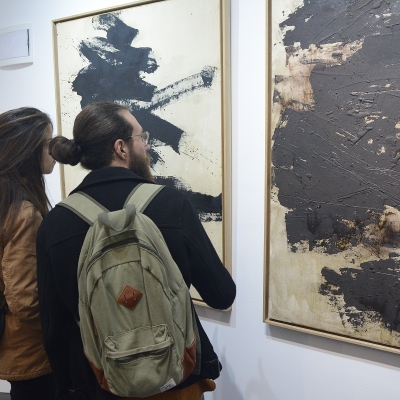 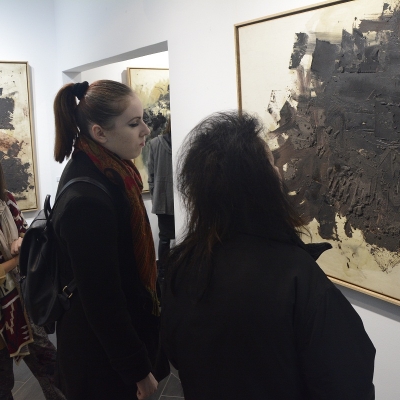 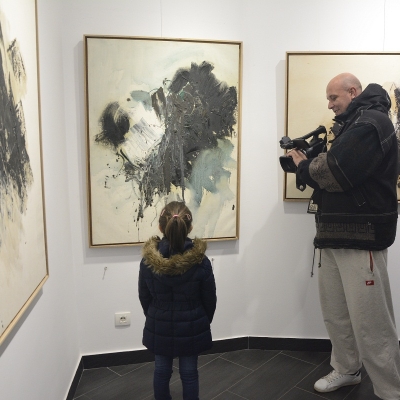 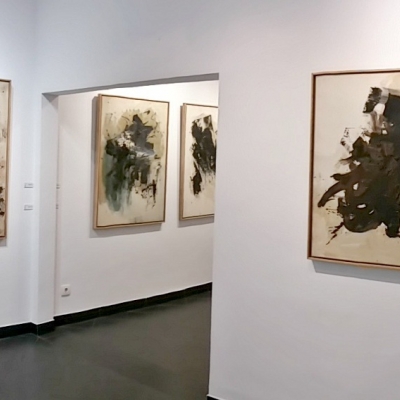 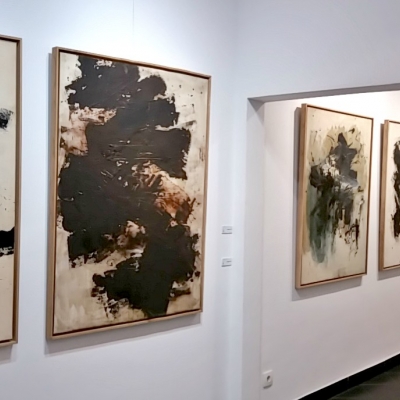 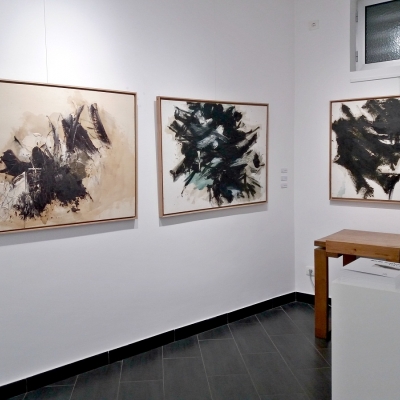 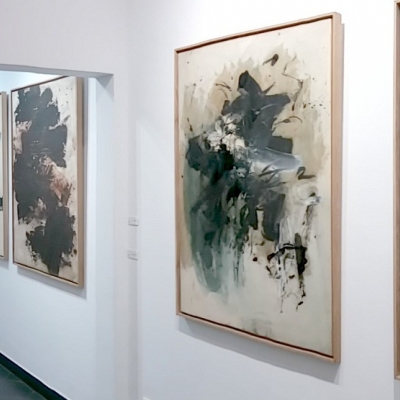 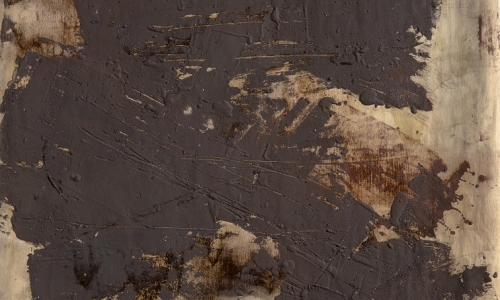 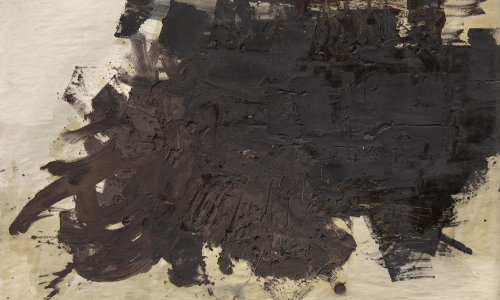 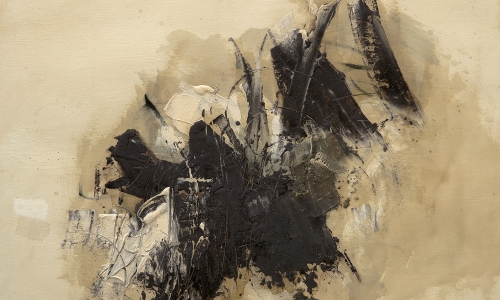 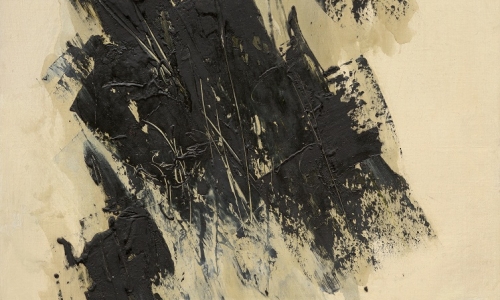 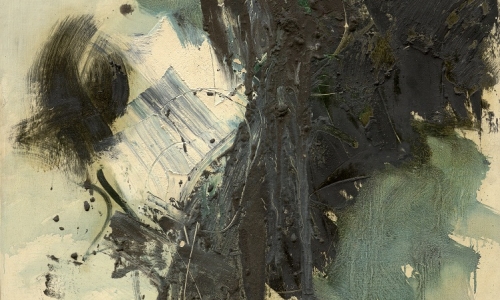 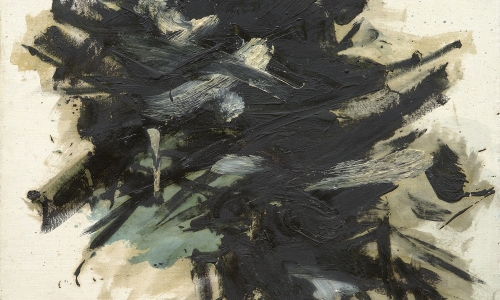 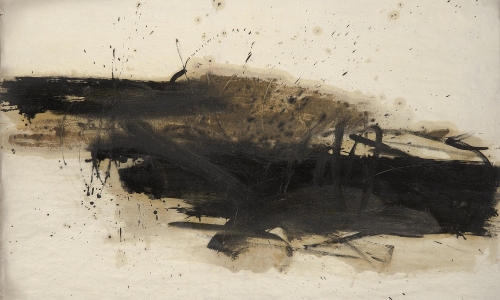 From the 1950s and his first encounter with the works of French and American contemporary artists to the beginning of the new millennium, when he gradually ceased to paint, Đorđe Ivačković spent sixty years of continuous artistic activity and built a vital symbiosis of his two greatest affections in art – music and painting, or more precisely, jazz and abstract painting.

Before his serious engagement in visual arts, Ivačković was a devoted Belgrade jazzer. Although musically educated from his early years and able to play piano and accordion, he did not choose to study music, but went to the Belgrade School of Architecture after completing high–school in Novi Sad (1948).

In the fifties, the capital of Yugoslavia was opening to the Western world and this tendency was most obvious in the area of culture and entertainment. Cinemas were frequently showing American films and radio was broadcasting jazz, soon to become the music of dancing–halls and parties. The population of Belgrade was able to see artworks from the greatest world museums and works by the most important contemporary artists from America and Western Europe. Despite a continuing ideological control and censorship, the political turn to the West after the break with the Soviet Union in 1948 propelled the development of social and cultural life of Belgrade and the young, to whom Ivačković also belonged, felt its long–lasting and significant influence.

As one of the most important legacies of American culture, jazz was in the post–war period one of the main paths for the dissemination of American influence in Eastern Europe. The Voice of America  broadcast in Yugoslavia in the fifties and as Ivačković used to say, that radio–station was „to blame“ for his first encounter with jazz from the West Coast. Ivačković did not even consider painting as a profession in the first years of his studies, but his interest was then diverted from architecture by jazz. He not only fervently listened to jazz but played it on the piano and accordion, with his band, mostly at Belgrade parties. He was known in jazz circles as Đorđe „Bop“ Ivačković, and in surveys of the local jazz scene he is mentioned as the first jazzer with a private tape recorder. Since his father was working in the United Nations, he brought this precious and then very rare equipment from abroad.(1) According to some later statements by the artist, at that time he was conducting a small radio orchestra. Although he stopped playing a few years later, in the fifties Ivačković took active part in the social life of Belgrade where the musicians playing in dance–halls „were the stars (big names), parties were held for their sake and talked about for days“(2). Since many jazzers had nicknames, perhaps it is not unimportant to note that his was related to be–bop, a kind of modern jazz; musicians who later became the main protagonists on the local jazz scene had much more personalised nicknames, frequently without any reference to music.  evertheless, Ivačković gradually left active music engagement because of a new creative obsession in his life – painting.

„Until I was twenty–five, twenty–six, I had no idea I was going to be a painter (...) It emerged only after I had graduated architecture and the studies helped me to make such a decision. I liked visual arts subjects, drawing, watercolours, and the professors were excellent. Before that, I was mostly in music, I played jazz fervently, avant–garde jazz, quite a new thing in the fifties. It was probably related to my desire to communicate with the time... I always liked what was fashionable and in“(3) – the artist remembered many decades later in an interview for the magazine Moment (1989). An inquisitive young man who liked to take part in everything new and modern in his surroundings, he found spare time between his Faculty obligations and evening jazz sessions to visit the cultural events which brought Western world, primarily the world of art, into the Yugoslav everyday. In 1952 Ivačković saw the exhibitions „Contemporary French Art“ with works from post–impressionism to new primitivism and figurative art. He was  particularly impressed by painters gathered under the title „Abstract“: Hartung, Deyrolle, Lanskoy and Esteve. This show tickled his curiosity, but the exhibitions he saw in the years to come inspired a radical turn in his life and creative engagement: „Contemporary American Art“ (1956) and „Contemporary French Painting“ (1958). For the young jazzer who drew only occasionally, the encounter with artworks by painters unknown to him was decisive: Hartung, Schneider, Soulages, Matieu, Zao Wou–Ki, then Kline, De Kooning, Pollock and other protagonists of French lyrical abstraction and American abstract expressionism. The strongest impression Ivačković had at these exhibitions was the analogy between that painting and his love for jazz. He described this vital experience in his first interview: „Everything was clear to me. It was an expression of motion and had a direct influence on me. Maybe it was so because of music, even classical music I have known since my early childhood, maybe music taught me to think ’abstractly’ about relations, to get involved in manifest relations only, and not in ’meanings’ in a literal sense“ (4). As if Đoka „Bop“ saw jazz for the first time! His awareness of the fact that the same qualities he found in jazz were possible and realisable in visual arts elevated his totally informal painterly experience onto a high position among creative priorities, so that he spent more spare time with the brush and paints than with his musical instruments.