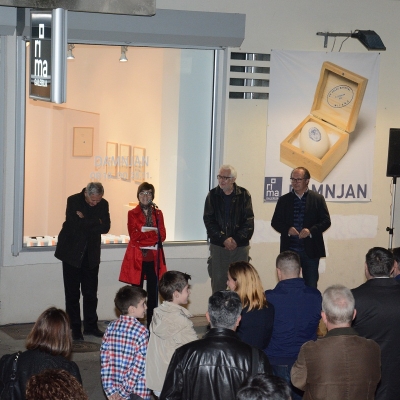 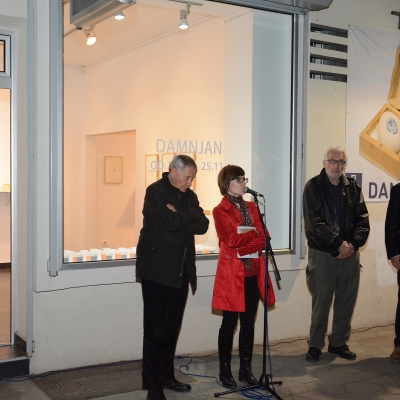 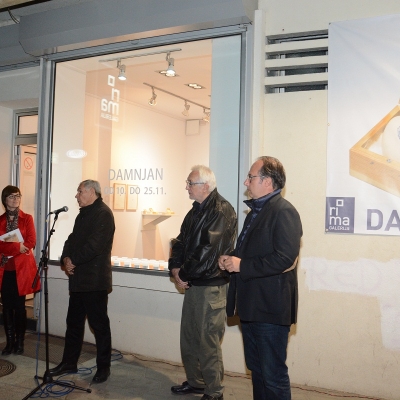 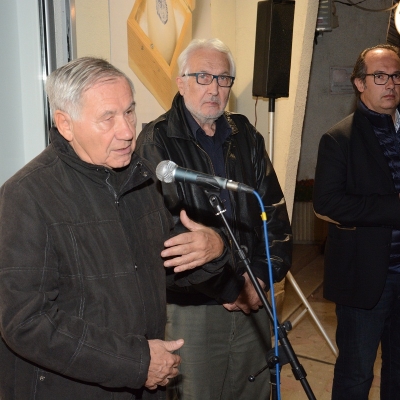 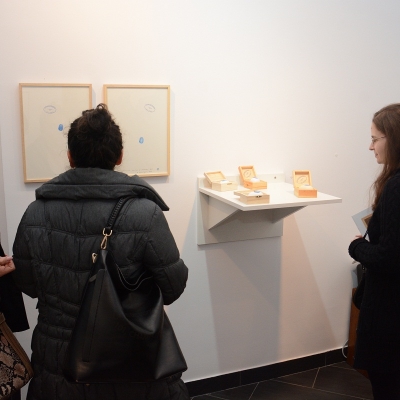 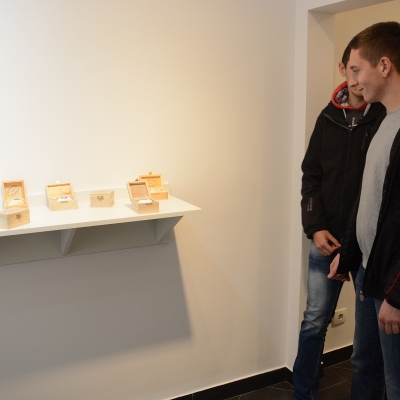 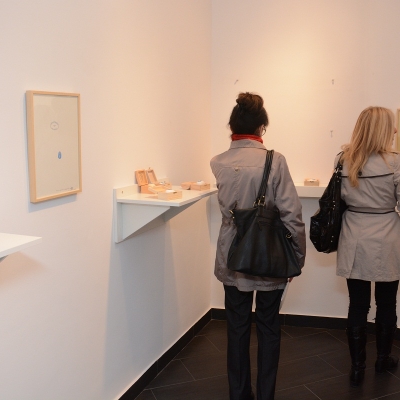 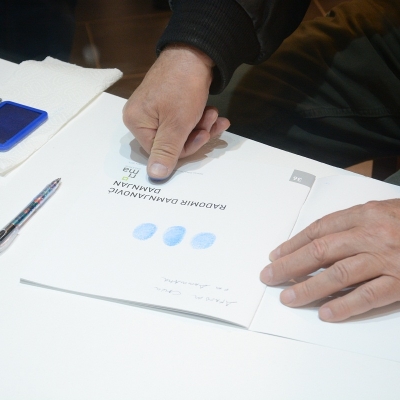 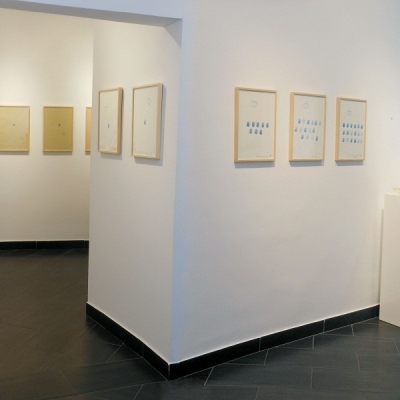 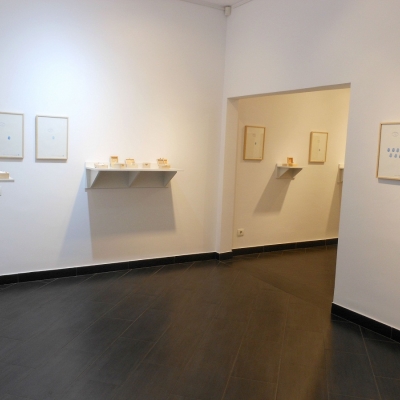 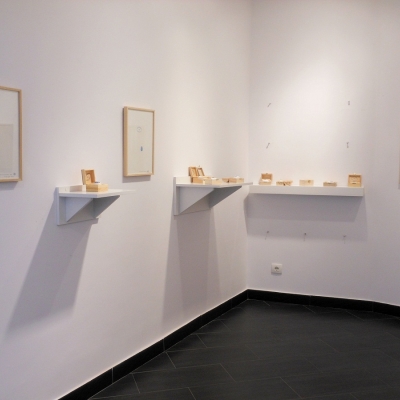 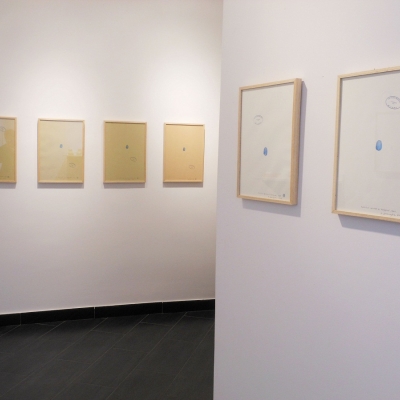 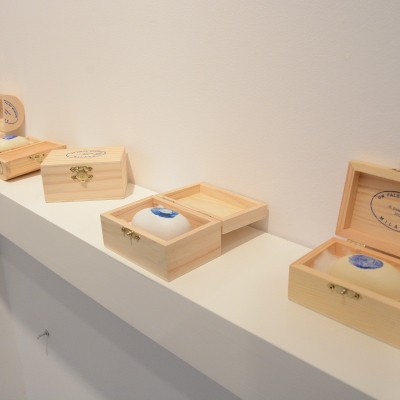 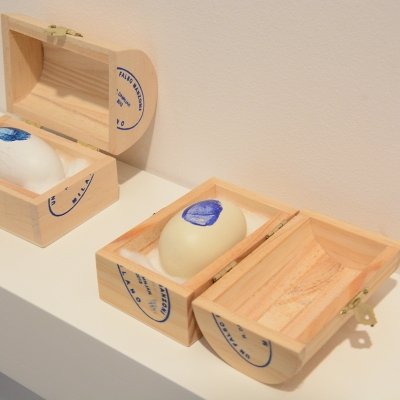 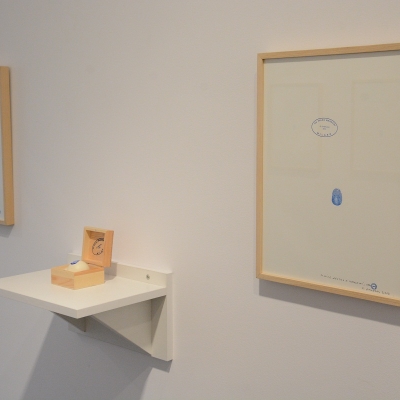 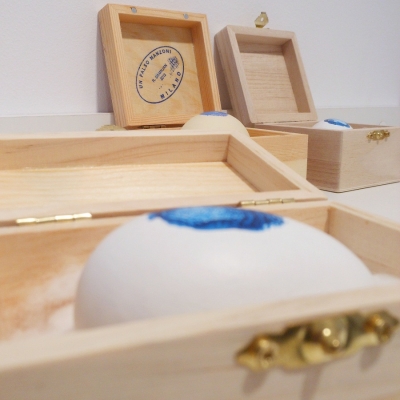 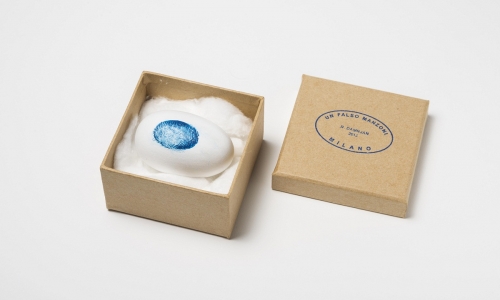 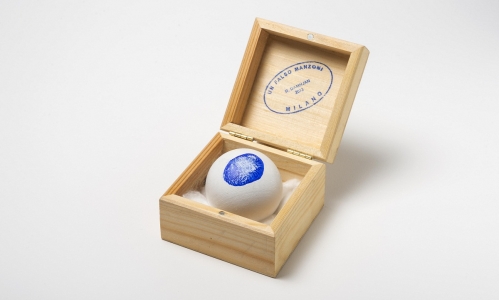 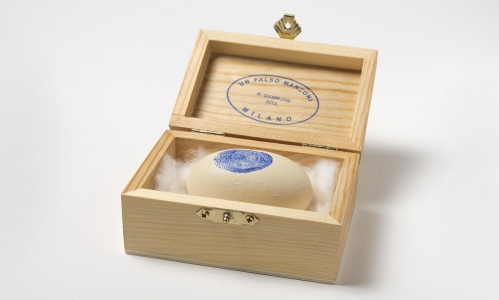 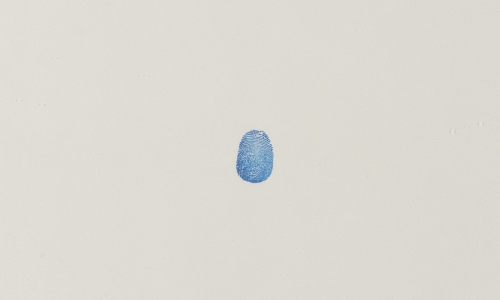 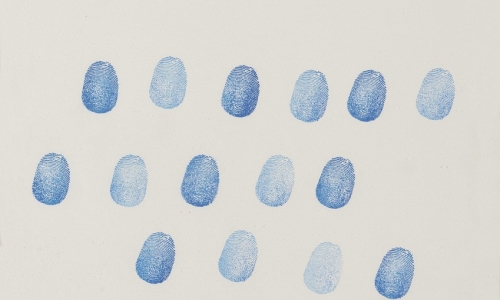 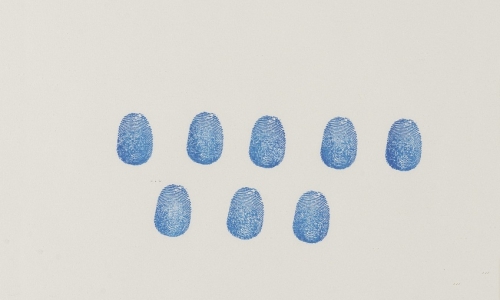 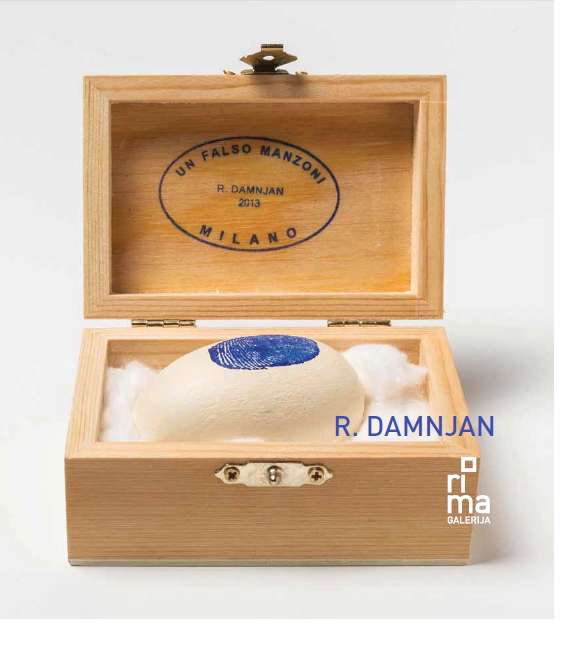 Ješa Denegri
AN EXAMPLE OF THE ART OF „REPETITION WITH DIFFERENCE“: THE RELATIONSHIP DAMNJAN+MANZONI

Long ago, in 1976, Damnjan had made and later, in 1986, exhibited at his retrospective in the Museum of Contemporary Art in Belgrade six paintings entitled Un falso De Chirico and four paintings entitled Un Falso Carrá. These titles referred to replicas of the most famous works by the two great masters of Italian metaphysical painting. In order to avoid a possible confusion, the artist attested his realised intention by a painted authorial stamp that those were not original works but, evidently, copies as legitimate products of another artist. In the mid-seventies those were early examples of action that would soon become, like quotations, repetition with difference, replicas with theoretical strategies of appropriation and simulation, very frequent procedures in the artistic atmosphere of postmodernism. Almost four decades later, Damnjan undertook another, similar but also different action from the aforementioned and made dozens of small wooden boxes with a wooden egg-shaped object in them and sheets of paper with the imprint of a thumb, everything certified with the ial stamp saying Un falso Manzoni. After decades of working in Italy, Damnjan would accept as his artistic forerunners the two classical masters from the first half of the century and a post-war avant-garde artist, desiring to express his own appreciation, in addition to the historically affirmed recognition, but in so doing – and that constitutes the essence of his intention – he produced his own works of art that pose numerous very provocative theoretical, philosophical, economic and ethical questions regarding the creation, appearance, concept, meaning and status of a contemporary artistic act.

Who was (and why) Manzoni?
Piero Manzoni (1933-1963) was an important name in Italian art after informel (dopo l’informale), posthumously with a significant European and global reputation. He worked in Milan between 1957 and 1963, and with Enrico Castellani founded a magazine and run the gallery Azimuth. The basic cycles of his production and at the same time examples of his artistic comportment were: Achromous (Achrome), Artist’s Shit (Merda d’artista), Artist’s Breath (Fiato d’artista), Artist’s Blood (Sangue d’artista), Imprints of Thumb (Impronte del police), different length Lines (Linee), Alive Sculptures (Sculture viventi), Eggs with Imprints of the Thumb (Uova con impronte), and everything followed the same idea: to show and prove in numerous ways, while burning inside, bringing himself closer to premature death in his thirtieth year, that the work and works of an artist, his overall existence, must fully and totally be identical. As his artistic credo he left the text „Free dimension“ (Libera dimensione) where the essential passage runs as follows: „To allude, express, represent – those are non-existent problems nowadays regardless of what is represented, an object, a fact, an idea... A picture has worth only if it is, without exception; one need not say anything, just be. Two innocent colours or two tones of one colour already make up a relationship that is foreign to the meaning of the surface, uniform, unlimited, absolutely dynamic... The art that uses composition, form, has no importance: in a total space, forms, colours, dimensions, have no meaning. The artist has won his complete freedom: pure matter turns into pure energy; obstacles in space and bondage to a subjective vice have been defeated. And all the problems of art have been overcome.“
Argan left the following definition of Manzoni’s complete unity of life and art: „Manzoni used to experiment with everything, like a sick person who tries many drugs, not because he thinks they would help him recover, but to prove to himself that not one of those drugs could help him.“

About the Relation Manzoni-Gorgona-Damnjan
Damnjan made the works attested with his authorial stamp saying Un falso Manzoni after the photographs printed in the catalogue of Manzoni’s retrospective in Milan in 2014, but he had known of this Italian artist much earlier, among other things owing to his contacts with members of the group Gorgona, who had invited Damnjan to Zagreb in 1962 where he organised a solo show; the accompanying text was written by Matko Meštrović and published in a modest catalogue-invitation card. Soon afterwards, Manzoni prepared for his, unfortunately unrealised, author-edition of anti-magazine Gorgona three proposals bearing the same title Tavole di accertamento: under (1) with the letters of alphabet, under (2) with imprints of the thumb and under (3) with the line. Therefore, there is a number of data which, more than fifty years later, remind us of direct or indirect relations in the triangle Manzoni-Gorgona-Damnjan, inspired by the events in Zagreb in the 1960s. Damnjan’s work Un falso Manzoni perhaps owes its initial idea to those far away but still remembered circumstances.

What are „Edible Sculptures“?
In 1960, one of the most fruitful years in his short artistic biography, Manzoni performed, among other things, the action called Consuming Art (Consumazione dell’arte), organised in the Gallery Azimuth. „Mobile public consumption of art by means of the swallowing of artworks“, it was written, and then: „You are invited to a direct participation in the consumption of works by Piero Manzoni on Thursday 21 June at 7 p.m.“ On that occasion, Manzoni urged his visitors to eat straight away the offered forty boiled eggs, each with the imprint of the artist’s thumb and placed in small wooden boxes. These „edible sculptures“ (sculture da mangiare) ought to have realised „the most direct relationship between an artwork and its owner”, and that relationship, thought Manzoni, should really have been „the most direct one“ if the owner dared and could eat the offered artwork. In addition, those boiled eggs had the status of a legitimate artwork – the artist guaranteed it by marking them with the imprint of his thumb, believing that such an imprint was the only unrepeatable and unchangeable characteristic a human being could not share with any other person in the world.
According to the statements by those who know this story, only three boxes with boiled eggs, attested by the imprint of the artist’s thumb, have been preserved to the present day – those marked with the numbers 11, 12 and 34 (all other were, allegedly, eaten at the opening of the exhibition). In order to „multiply“ them subsequently, now as replicas Un falso Manzoni, Damnjan entered upon this intriguing operation intending to bring back to the contemporary art scene Manzoni’s idea from long ago, but this time in a subsequent treatment and as his own work.

The „Art of Appropriation“ Context
Damnjan’s procedure applied in the series Un falso Manzoni was in fact the “art of appropriation” meaning that an idea or object of an existing work by one artist are introduced into the concept and form of a new work by another artist. All of this is well-known in the history of modern art and frequently a practically applied experience proven and confirmed by numerous strategies of appropriation procedures. But the way in which this procedure was applied in Damnjan’s example, in relation to other examples of the “art of appropriation” is really specific. Namely, Damnjan did not take over a ready or found object outside art and simply proclaimed it to be an artwork, as was done by ready-mades. In this case he did not simply use a concrete boiled egg, but with the help of a specialised assistant – who had previously finished all the technical work on wooden boxes and the egg-shaped forms in wood – he completed the concept and appearance of his own work of art. Furthermore, the imprint of Manzoni’s thumb was produced digitally, and accordingly the stamp with the text Un falso Manzoni. All of these operations were then united into an afore determined whole which in the final stadium acquired the qualities of a legitimate object of art. The process of invention and realisation of a new artwork on the basis of one produced before as Damnjan’s was founded on Manzoni’s, was an original contribution (if the notion of original is applicable in this case) to the overall context of the “art of appropriation”. Damnjan’s undertaking within the mentioned context is specific because it is, among other things, witty, amusing and inspires deep reflection, in a word it is positive and not ironic, cynical, malicious, envious, or negatory in relation to its predecessor. Moreover, this work by Damnjan assumes that not a single really successful contemporary work and work by a contemporary artist can be generated and then survive outside the experience and knowledge of art history, because nowadays the most lucid art practices are products of a creative symbiosis of reason and imagination and use the rich stocks of old and recent artistic legacies. Damnjan found one such possibility in his address to Manzoni’s inventions and showed that the work of one artist is inseminated and continued in the work of another, securing in that way further circulation of contemporary art in its numerous and infinite courses of unstoppable continuation.